With close to a dozen off songs in Street Dancer 3D, one expects an out and out musical in the offering from filmmaker Remo D’Souza. With Varun Dhawan, Shraddha Kapoor, Prabhudeva and Nora Fatehi as the principle cast members, there is a good visual appeal on the cards as well. Multiple composers, lyricists and singers come together to put together the soundtrack. 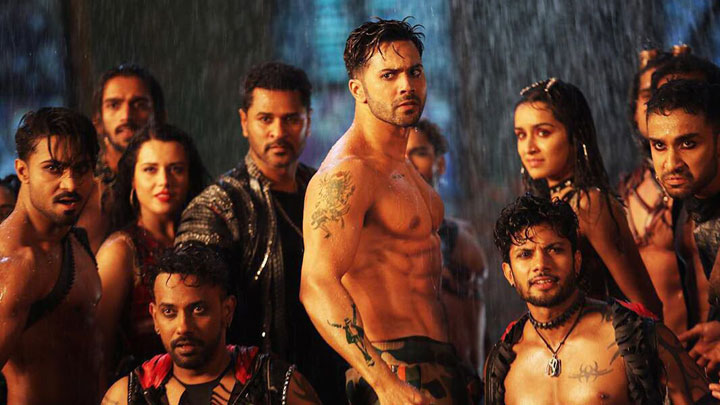 A.R. Rahman’s chartbuster ‘Muqabla’, which has regaled audiences for over two decades now, is back in the fold with – who else but Tanishk Bagchi – bringing on the recreation. The essence of the original, especially the passages, is kept intact even as Shabbir Ahmed and Tanishk Bagchi add on to the lyrics that had been originally written by Valee. Yash Narvekar and Parampara Thakur do well to bring on the energy and though the end result is satisfactory, all said and done one would rather go back to the original.

Badshah continues to bring on the sound of seduction with ‘Garmi’ where he plays the triple role of being the composer, lyricist as well as singer. He is joined by Neha Kakkar who is just the right voice for this track that has Nora Fatehi at her sizzling best and Varun Dhawan serenading her. Expect this one to play on in night clubs for quite some time to come.

Tanishk Bagchi and Intense join hands for ‘Illegal Weapon 2.0’ which is yet another recreated version. Written by Priya Saraiya and Garry Sandhu with latter pairing up with Jasmine Sandlas behind the mike, this Punjabi-Western combo number is just the kind that is made for the night clubs. That said, this one had the kind of set up to it which would have been propelled to a higher stage had it been more energetic.

Sachin-Jigar have composed as many as five songs in the album and the first one to arrive is ‘Dua Karo’. A situational track written by Priya Saraiya with a sad undertone to it, this one is a ‘sufi rock’ number that is rendered by Arijit Singh. Bohemia chips in as well for an intermittent rap portion, something that makes an impression primarily along with the film’s narrative.

Guru Randhawa’s chartbuster track ‘Lagdi Lahore Di’ is brought to fore all over again with Sachin-Jigar taking charge and Tulsi Kumar stepping in as a female vocalist. The song has been a huge success across the country, especially up North and its re-entry in Street Dancer 3D brings on an added shelf life. However, just as was the case with ‘Illegal Weapon 2.0’, this one too could have gained further from enhanced energy. Somehow this one appears to be rather subdued.

Shankar-Ehsaan-Loy and Sameer’s ‘Hindustani’ [Dus] is recreated by Harsh Upadhyay and the results aren’t really the kind that would have taken the song to the next level. As a matter of fact this one seems like a rather rushed job and even though the voices of Shankar Mahadevan and Udit Narayan are retained, the punch is clearly missing.

‘Bezubaan Kab Se’, which has a thematic appeal when it comes to the ABCD franchise set by Remo D’Souza, appears in a new version with Siddharth Basrur and Jubin Nautiyal crooning for Sachin-Jigar who compose as well as write this one along with Mayur Puri. While it does play a part in carrying forward the core spirit of ‘Bezubaan’, somehow it doesn’t cover the distance.

Next to arrive is Gurinder Seagal sung and composed ‘Pind’ and somehow this sad song about returning to the motherland only slows down the soundtrack further. Kunaal Vermaa writes this Punjabi-Hindi number which has a very dull feel to it and just doesn’t manage to make its presence felt or register any sort of impact whatsoever.

It is back to some dance and fun with Neeti Mohan, Dhvani Bhanushali and Millind Gaba coming together for Sachin-Jigar created ‘Nachi Nachi’. Though the song has a good hook to it, somehow there hasn’t been any promotion whatsoever which means this Millind Gaba and Asli Gold created track would largely go unannounced. This is followed by a devotional track comes next in the form of ‘Gann Deva’ which is in praise of Lord Ganesha. Written by Bhargav Purohit, composed by Sachin-Jigar and sung by Divya Kumar, this one doesn’t make an impact either.

Garry Sandhu’s ‘Sip Sip’ finds a recreated version in ‘Sip Sip 2.0’, courtesy Tanishk Bagchi and Kumaar. Jasmine Sandlas comes behind the mike for this Punjabi-Hindi number which hasn’t really been immensely popular at an all-India even as an original. The recreated version is the kind that could have covered some distance but since it hasn’t been hammered all along, that won’t really turn out to be the case.

The soundtrack of Street Dancer 3D starts off well but then as it proceeds, the impact starts getting lesser and lesser. The good thing is that this one is a music heavy album as a result of which around four to five songs do ultimately manage to make an impression.